RPGClassics.com - Dragon Warrior III Site Navigation   Shrine Navigation.NES -.GBC -NES Wow! Update by Who'd of thought that I'd update the NES shrine so soon? Well, I uploaded some maps that I've been forgetting to for quite some time. We've Gone Portable Update by Sorry about the lack of updates, but I've been rather ill lately; regardless, I'm back now. As you can see, I've added a selector on this page directly under the logo, so now you can quickly jump over to the Dragon Warrior III GBC shrine, should you actually be looking for data on that game, and not the NES game. The Table of Contents (located to the left) on the GBC page links only to the information pertenent to the GBC game.

Any new updates regarding the GBC game will only be posted on the GBC index page. Look forward to the completed NES walkthrough after the completed GBC shrine. We're Going Portable Update by Dragon Warrior III is in stores across America. It actually came out a couple of days ago, but it should be in a store near you by now. If you have a GameBoy Color or a GameBoy Advance, get this game. Note: The game DOES NOT work on classic GameBoys.

Regardless, the shrine is now going portable, which means that, soon, the shrine will fully cover the GameBoy Color version of the game. You can see where it is going by checking the page; it is the first to have a NES/GBC option at the top of the page. If you can think of a better way to impliment the GBC additions,. UPDATE: I've finally revived the Character Classes page, and it's the second page to have the GBC additions.

Walkthrough for Dragon Warrior III. The Kingdom of Aliahan. At the beginning of the game, enter the castle and speak to the king of Aliahan.

Plus, I made a cheesy little page of pictures from the Personality test for people who don't have the GBC version. I'll be adding an in-depth guide to the Personality test, soon. Walkthrough Update by Just a disclaimer: in it's current shape, the walkthrough is a little shoddy. It's going to be much more extensive than the walkthrough from the old DW3 shrine, so it's a bit more than I have notes on. I have notes for most things in the game, but some of the monotonous things that I'm including in the walkthrough (that can be very vital when consulting a walkthrough) aren't really documented anywhere (including my notes), so I have to go back through the game and get them. Don't worry though; the walkthrough will be complete, and include maps and data sheets galore! Though the walkthrough will be complete to the point of getting one's self through the game before the GBC version comes out, the full features won't be for a few weeks afterward (which is when most GBC players will need them most).

Updates Update by I stand by my previous promise of having the walkthrough done by the time the Gameboy Color version of the game is released, and it looks like I can really get it done. Also, for those of you who already have the portable version of the game (or the SFC version), remember that this site wasn't originally made to cover those games, so it doesn't have all of that information; the mini-games, the monster coins, and the hidden dungeons aren't covered, but coverage will be added quickly after the North American release of the GBC game. Expect a lot of updates in mid-July. 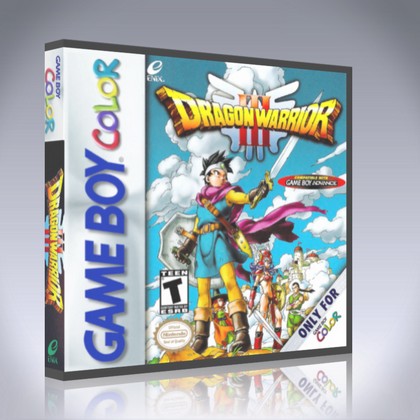 Site redesign in progress Update by If you couldn't tell, we're undergoing a change in layout. It should be done soon. Also, I've removed the Remix section for now, as I currently have no information in it. The completed walkthrough is also underway. Oh, and as soon as the Gameboy Color version of Dragon Warrior III comes out, you'd better believe we'll be the first to have all of the information. Update by Music page is up. Remix and walkthrough are under construction now.

This shrine was completed back in April of '99, but was destroyed in a messy move from a different server (which should teach me to always keep backups.:D). Saturn, your maintainer, and am happy to bring you the definitive source for all things relating to Dragon Warrior III. I say Dragon Warrior III, because I won't offer all of the information about Dragon Quest III. It's not that it's less important, it's just that I'm not Japanese, and don't know everything about it. It's to be understood that Enix plans on re-releasing this great game on the Sony Playstation, and with Enix re-opening in America, there's even a chance we North Americans can see Dragon Warrior III in all of it's glory again.